A Modern Translation of Ancient Wisdom: The Gathas and the Old Avestan Texts: Wisdom for All Seasons

Out of all the works in human history, none has had as massive and as wide-reaching of an impact as the Gathas and the Old Avestan texts that surround it. Composed between 3000 to 4000 years ago by Zarathushtra, an enigmatic poet-priest from ancient Central Asia, it has not only formed the core of Zoroastrianism, which was once the largest religion in the world (and is now one of the oldest), but also has served as an influence on Judaism, Christianity, Islam, Buddhism, European Philosophy (dating back even to the Greeks), Western Esotericism, Baha’iism, and many more spiritual and philosophical traditions throughout history. It has formed the core of great literature and has inspired a wide variety of authors such as Gore Vidal, Philip K. Dick, George R.R. Martin, and others, not to mention how prevalent it is in modern media including cinema, television, music, and gaming sometimes without folks even realizing it. From Tokyo to Zanzibar to London to Los Angeles, the Gathas and the Old Avestan texts are seemingly everywhere, but so few seem to even know about it and even less know about what it’s all about. So, how about we briefly explore this ancient and revolutionary collection of spiritual poetry?

Zarathushtra’s exhortation within these works, a short collection of prose-poetry, liturgy, and prayer that are a mix of spiritual teachings and personal reflections, is for us to be fully responsible for our own actions in an existence that centers our free will as one of the most important factors of living. We are asked to take part in both a personal cosmic struggle in support of Asha, the pure life-force of the universe, against the forces of Druj, the creeping illusion that distracts us from living joyful and virtuous lives. For Zarathushtra, Asha is empowered by virtuous thoughts, words, and deeds and leads us towards wholeness, empowerment, liberation, vigor, justice, and love when we align towards its Threefold Path. Druj, a word literally meaning “the lie”, is a sort of putrid anti-life that tricks us, confuses us, and, while it cannot be empowered, it is nonetheless perpetuated by malice, greed, tyranny, and wanton destruction which then leads us to pain, oppression, suffering, and death.

We have free choice as to what side we support but there is no eternal damnation or irredeemable natures preached in the Gathas and the Old Avestan texts. Instead, Zarathushtra consistently asks Ahura Mazda (“Lord of Wisdom”), the highest god of the faith who he considers his friend, teacher, and ally, for his enemies to instead be made into his friends and he notes that even the Daevas, the malicious oppositional beings in Zoroastrian cosmology, can themselves become virtuous and wonderful again. The Gathas view people and life as truly good and only confused by Druj which is a path they can correct with enough effort, support, and study so that eventually all conscious beings may renovate existence and achieve an enlightened state in alignment with Asha. Harmony and veneration of nature are important in leading towards this renovation as the cries of the cow in the Gathas are what spurs Ahura Mazda and their divine manifestations to go in search of Zarathushtra and set him on his mission. Zarathushtra requests that we all be charitable towards each other and to the rest of the natural world so that together we can dispel the Druj and live truly our best lives. This is done not just through following the Threefold Path of Asha but also by seeking wisdom and understanding wherever we may find it so that we may learn and grow together and thus spread the knowledge that can one day lead us to universal enlightenment.

These messages of environmentalism, universalism, learning, charity, fraternalism, virtue, love, and peace permeate all throughout the Gathas and the Old Avestan texts and still inspire and drive Zoroastrians today to live great and impactful lives such as the Freddie Mercury, Zubin Mehta, Cyrus Poonawalla, Homi K. Bhabha, Bapsi Sidhwa, Zerbanoo Gifford, Bhikaiji Cama, Dadabhai Naoroji and countless others innovators, entertainers, scholars, and philanthropists that have had an outsized influence for a community that now numbers less than 200,000 globally at the most liberal of estimates. Most Zoroastrians will tell you how continuously astounded they are by how relevant and topical the Gathas and the Old Avestan texts remain to this day even thousands of years after Zarathushtra first spake his eternal teachings. Somehow, considering all the issues we face today, these ancient texts still urge us to consider the importance of gender equality, the fight against oppression, the need to educate each other, how we must care for the environment, how to best support and protect the disadvantaged and impoverished, the necessity of inclusivity and transformative justice, and how we are all truly one people working towards a better and more beautiful world.

Through this translation, it is my deepest hope that they continue to be as essential, relevant, and insightful for the next 3000 years as they have been for the past few millennia. By making sure to avoid the same mistakes that 19th and 20th-century translators conducted through their orientalist, philosophical, and political biases being interpolated into the text, this translation thus acts as a clear, modern, rigorous, and faithful translation of a text that has deeply defined the greater part of recorded human history. Through research, comparisons, oral and written traditions, and consultations with adherents, clergy, and academics alive, these themes previously explored in the article come alive through the text and thus speaks Zarathushtra to us through the fogs of ancient memory to us still today and remind us that it is our responsibility, alone and together, to enlighten ourselves and make the world the wondrous place we always dream it will be. May the Gathas and the Old Avestan texts speak to you as they have spoken to me and countless others throughout history and, as we Zoroastrians tend to say, Ushta Te (Maybe Joy be Upon You)! 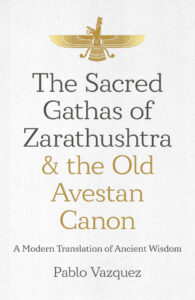 Zarathushtra’s Gathas & the Old Avestan canon are the central texts of Zoroastrianism, one of the oldest continuously practiced religions in the world that has had a vast influence on the development of many other religions, philosophies, global ethics and more. Composed more than 3000 years ago, they remain surprisingly evergreen in their relevance. With this new and innovative translation, Pablo Vazquez, a Zoroastrian scholar and convert, sheds new light on these sacred texts of eternal wisdom in a way that makes them accessible to a modern audience.

The Gathas and the Old Avestan Texts: Wisdom for All Seasons By Pablo Vazquez is available from www.mantra-books.com and from wherever books are sold

Bad Bitch Quotes and Sayings To Make You Strong and Resilient

Quotes For Condolences On Loss Of A Father

SPIRITUAL147LIFE126INSPIRATIONAL89VIDEOS19BOOKS3
Previous articleThe Art and Science of Tarot
Next articleAlign: Living and Loving from the True Self
SPIRITUAL